This latest firefly story from the folks over at KQED’s Deep Look has just about everything: sparkling romance, hidden poisons, and deadly deceit. As the famous firefly biologist Jim Lloyd once said about these North American Photuris femmes fatales, “If these were the size of house cats, people would be afraid to go outside at night.”
Watch it, then watch out!

Recently I’ve learned via Twitter that lots of cats (dogs, too) enjoy chasing after fireflies. But please don’t let your pets eat the fireflies! This is for their own sake, not for the fireflies. 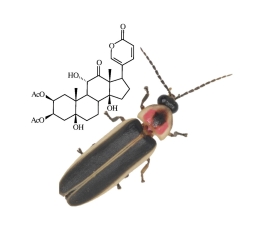 Lucibufagin (often nicknamed LBG) makes a powerful poison because it is effective against almost any animal. It binds to and disables an enzyme, known as the sodium-potassium pump, that’s essential for all animal cells. This enzyme actively transports ions across cell membranes, generating an electrical potential that allows us to do really important things like think and move our muscles. To protect themselves, many plants and a few animals have converged on stocking similar toxins in their chemical arsenal.