Living light is everywhere. It turns out that bioluminescence – the emission of light by living organisms – was invented about 40 separate times during the evolution of life on Earth. Today, the sea houses the vast majority of light-producing creatures ; these include bacteria, dinoflagellates, crustaceans, jellyfish, starfish, octopus, and many denizens of the deep sea. One night while kayaking the Sea of Cortez, we swam among luminous dinoflagellates so that our bodies, and the dolphins swimming nearby, were outlined in a fiery glow – a truly memorable experience!

Bioluminescence is much less common on land, although this light-producing talent shows up in fungi, a snail, several earthworms, and a host of insects – fungus gnats, millipedes, click beetles, railroad worms and, of course – in fireflies! I recently discovered some tales of cross-species exchange between fireflies and glowing sea creatures. Tucked into the memoirs of two great 20th century naturalists who lived on opposite sides of the world are descriptions of a fascinating phenomenon where fireflies got distracted by sea creatures glowing in the surf.

The first luminous tale comes from the pioneering ecologist and gifted writer Rachel Carson (1907–1964), who gave us Silent Spring and taught us how to cultivate wonder (see earlier post). Trained as a marine biologist, Carson loved the ocean and spent summers along the rocky coast of Maine. In August 1956, she wrote a letter* to her dear friend Dorothy Freeman about walking down to the shore one dark and windy night:

“To get the full wildness, we turned off our flashlights – and then the real excitement began… the surf was full of diamonds and emeralds, and was throwing them on the wet sand by the dozen…”

And then, along the shore…

“A firefly was going by, his lamp blinking. We thought nothing special of it, but in a few minutes… There’s that firefly again… he was flying so low over the water that his light cast a long surface reflection, like a little headlight… He “thought” the flashes in the water were other fireflies, signaling to him in the age-old manner of fireflies! Sure enough, he was soon in trouble and we saw his light flashing urgently as he was rolled around in the wet sand…You can guess the rest: I waded in and rescued him.”

A similar episode from the other side of the world appears in My Family and Other Animals, a memoir by the British naturalist Gerald Durrell (1925 –1995). Perhaps you’ve seen the fabulous PBS series The Durrells in Corfu? Then you’ll know that as a young boy, Durrell and his family lived on the Greek island of Corfu.

There he recalled a glorious night romp among living lights with his family:

“The phosphorescence was particularly good that night. By plunging your hand into the water and dragging it along you could draw a wide golden-green ribbon of cold fire across the sea, and when you dived as you hit the surface it seemed as though you had plunged into a frosty furnace of glinting light. When we were tired we waded out of the sea, the water running off our bodies so that we seemed to be on fire, and lay on the sand to eat.”

Then the fireflies appeared:

” Never had we seen so many fireflies congregated in one spot; they flicked through the trees in swarms, they crawled on the grass, the bushes and the olive trunks, they drifted in swarms over our heads and landed on the rugs like green embers. Glittering streams of them flew out over the bay, swirling over the water, and then, right on cue, the porpoises appeared, swimming in line into the bay, rocking rhythmically through the water, their backs as if painted with phosphorus… With the fireflies above and the illuminated porpoises below it was a fantastic sight. We could even see the luminous trails beneath the surface where the porpoises swam in fiery patterns across the sandy bottom, and when they leaped high in the air the drops of emerald glowing water flicked from them, and you could not tell if it was phosphorescence or fireflies you were looking at.”

For a deep dive into bioluminescence in the sea – and how it’s been harnessed by humans – you might enjoy this fantastic article by Ferris Jabr. And next time you find yourself at the edge of the sea, keep your eyes open and maybe you’ll be rewarded with a glowing tango of sea creatures and fireflies!

*I’m so grateful to Martha Freeman author of Always, Rachel, for telling me about the firefly letter, which was written in August 1956 to her grandparents, Dorothy and Stan Freeman. And thanks also to Hess Muse for alerting me to Gerald Durrell’s night romp with the Corfu fireflies.

The world of nature lost a powerful advocate when Rachel Carson, that gifted writer and reluctant activist, died of cancer on April 14th, 1964 at the young age of 56. These words are taken from her last book, The Sense of Wonder (Harper & Row 1965):

“A child’s world is fresh and new and beautiful, full of wonder and excitement. It is our misfortune that for most of us that clear-eyed vision, that true instinct for what is beautiful and awe-inspiring, is dimmed and even lost before we reach adulthood.”

“… [My] gift to each child in the world would be a sense of wonder so indestructible that it would last throughout life, as an unfailing antidote against the boredom and disenchantments of later years, the sterile preoccupation with things that are artificial, the alienation from the sources of our strength.” 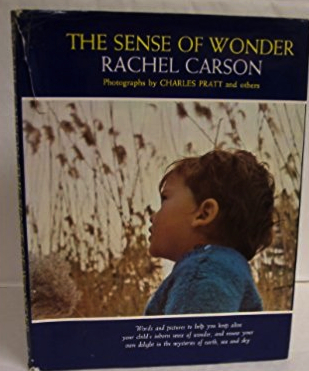 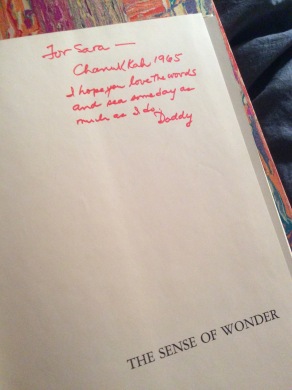 my Dad inscribed this book for me

Though I was only 12 years old when this book was published, this slim volume would exert an oversized influence on my life.

Both my parents loved the sea, walking in the woods, and gardening. They  instilled in their offspring a deep appreciation for the natural world. 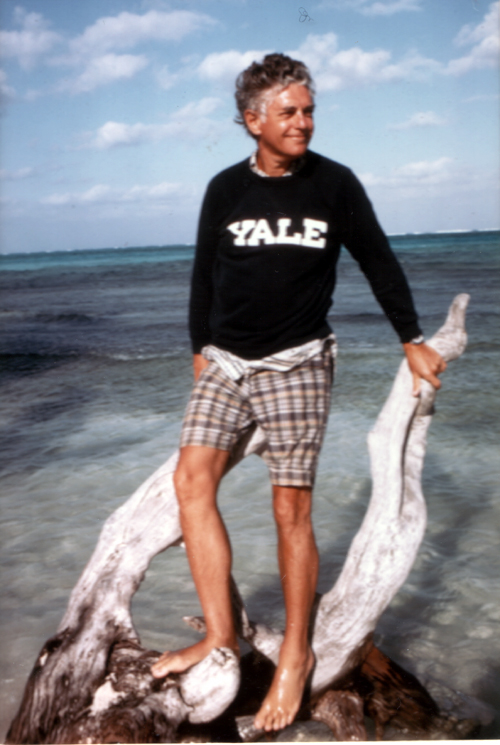 Fast-forward many years… when my Dad had just turned 84, I got this slipcased edition (The Nature Company 1990, with photographs by William G. Neill). And I inscribed it for him. 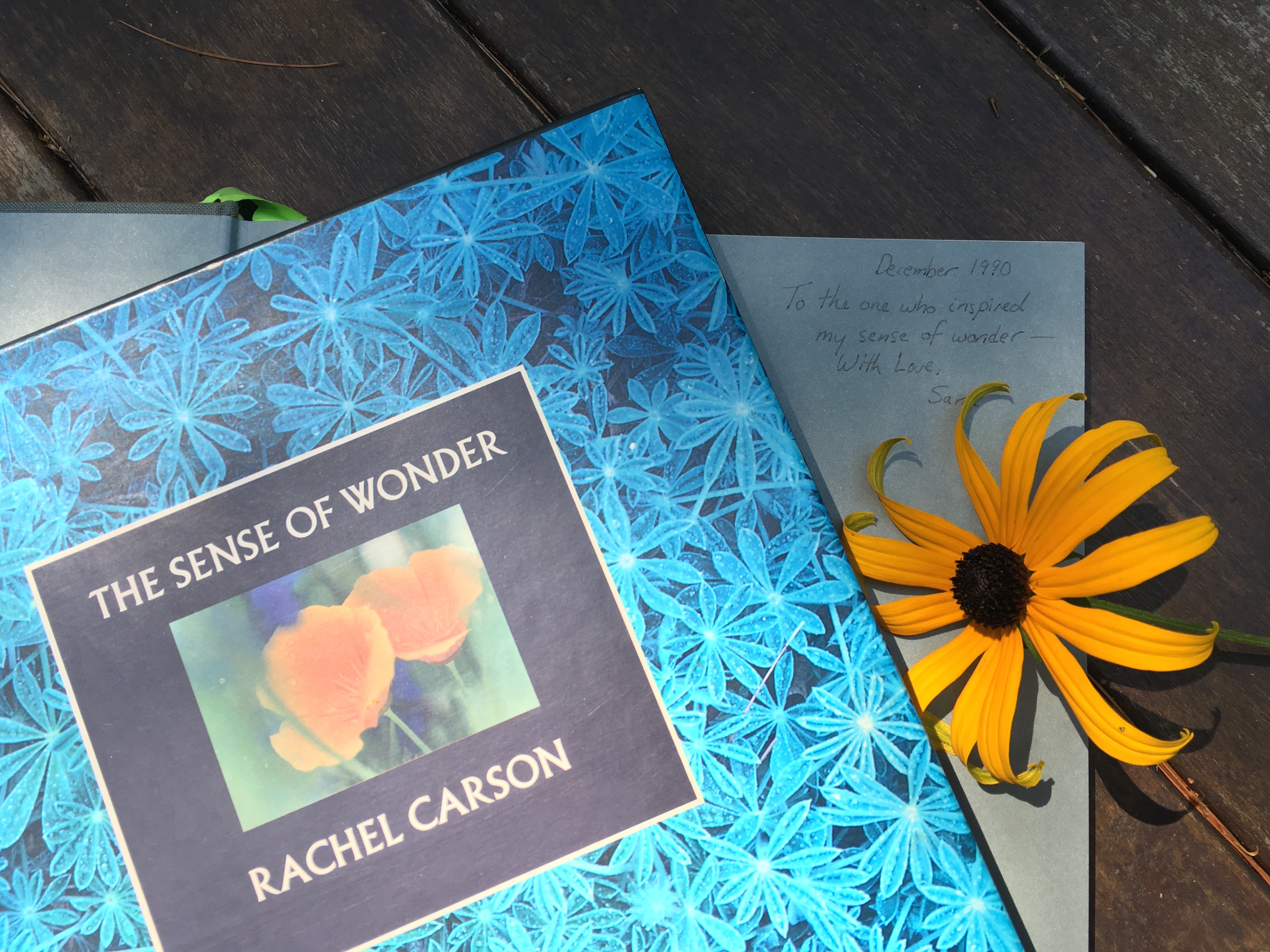 “To the one who inspired my sense of wonder“

When I wrote the dedication for Silent Sparks, I finally got the chance to express my love and gratitude to both my parents:

They lived and loved together for nearly ninety years,

and fed us wonder when we were very young.