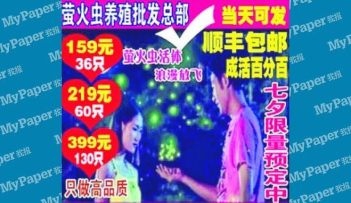 For the past few years, online sales of live fireflies have skyrocketed just before Qixi, the Chinese equivalent of Valentine’s Day. For many young Chinese, a jar of fireflies looks like a brilliant way to say “I love you.”

According to reports, more than 10 million Chinese fireflies were sold online in 2015, a tenfold rise compared with the same period the previous year. Costing a few hundred yuan, each  container holds 30-50 fireflies, most likely collected from the wild. But it makes a short-lived gift, because once they’re in captivity these fireflies will only survive a few days.

This year the Qixi holiday falls on August 9th – what will 2016 mean for Chinese firefly populations? Professor Xinhua Fu, a firefly specialist at Huazhong Agricultural University in Wuhan, Hubei province, believes this large-scale harvesting poses a major threat to China’s native firefly populations. Instead, Dr. Fu proposes, it would be considerably more romantic to go enjoy fireflies together in the countryside!

In 2014 I accompanied Prof. Fu to the opening ceremony for  China’s first firefly preserve on Purple Mountain (Zijin Shan) in Nanjing, established as part of Fu’s firefly conservation efforts.

Read this news story about loss of firefly habitat in China.