We know that fireflies give bioluminescent courtship signals, but firefly sex goes way beyond flashing. While mating, many male fireflies give the female a spermatophore, which is an elaborate, sperm-containing package. This firefly “nuptial gift” represents a hefty male investment that’s entirely home-made: it takes several glands to manufacture each gift. Until recently, though, we’ve been largely in the dark about the composition of these mysterious gifts. 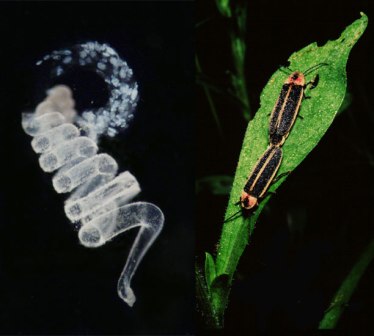 In a recent study, we used some cutting-edge technology to discover the molecular composition of the nuptial gifts given by Big Dipper fireflies, Photinus pyralis. Using transcriptome profiling, we measured gene expression within the male reproductive glands. We also did proteomic analysis to identify exactly what proteins are included in these gifts. We found over 200 known proteins, some of which are enzymes that could help “unwrap” the gift to release its contents. Other enzymes in the gift are likely to interact with the female’s own hormones to encourage females to lay more eggs. Still others might enhance a male’s paternity chances by increasing the ability of his, rather than a 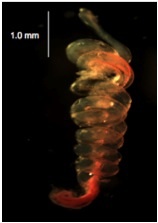 We also did high-resolution metabolomics, which revealed another surprising discovery came from. We found that firefly nuptial gifts contain lucibufagin, a bitter-tasting toxin shown in previous work to protect firefly eggs and adults against predators. Females could use these male-donated toxins to help defend themselves or their offspring.

Of course, so many questions remain to be answered! Are gift ingredients different in other firefly species? How does variation in these gift ingredients alter paternity success for mating males? We’d love to know the answers – stay tuned!

Our article is open-access, so if you’re interested in more details you can download it here for free.