In the firefly life cycle, the adults we see flying around us represent just the tip of the iceberg. Adult fireflies only  live for a few weeks, but they spend up to two years in a juvenile larval stage. We don’t see much of them during this time because they live underground (or underwater, in certain species).

During this larval stage baby fireflies concentrate on gluttony and growth, feasting on earthworms, snails, and whatever other soft-bodied prey they can find. They are small but fearsome predators, using their hollow, sickle-shaped jaws to inject their prey with paralyzing neurotoxins. Then they secrete digestive enzymes to liquify and ingest the prey while it’s still alive. 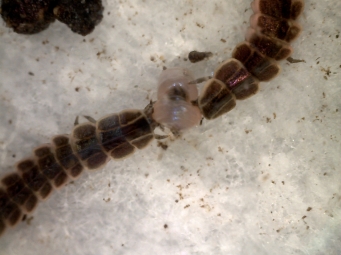 Since May, I’ve been rearing from eggs some Ellychnia corrusca fireflies (a dark firefly closely related to Photinus lightningbugs). When they first hatched, I carefully cut up tiny bits of earthworm for them (so sorry, earthworms, I hate this part of my job!). But now they’re big enough to take down an entire earthworm. Above, two of my babies are chowing down on a piece they’ve severed from the worm using their sharp jaws.

Update: Because they have exoskeletons, juvenile insects need to shed their outer skins as they grow. My two Ellychnia larvae are now 8 weeks post-hatching, and they’ve each  molted several times. This one is curled up and inactive, as it’s just getting ready to molt after a big earthworm feast. The same larva appears in the video below, just after molting (the old exoskeleton that it shed lies curled up near its back end). 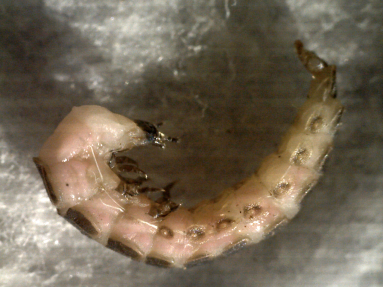 An 8-week-old Ellychnia larva who’s just getting ready to molt!