Fireflies need moisture during all of their life stages, especially their eggs and their long-lasting larval stage. Firefly larvae in the U.S. live in either soil or rotting wood, and this juvenile stage lasts up to 2 years in temperate latitudes. 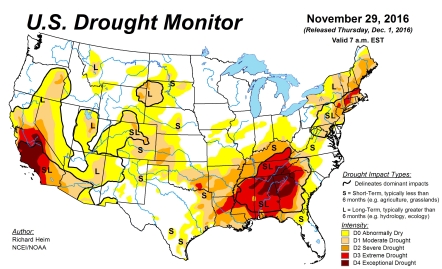 Their ecological requirement for moist conditions make firefly eggs and larvae especially sensitive to drought conditions. During the summer of 2016, according to NOAA’s Drought Monitor,  much of the United States has experienced drought or abnormal dryness including the northern to central Plains, the Southeast, and southern New England. These dry conditions will mean fewer fireflies in future years. Fireflies court and mate during the summer, then lay eggs that hatch out into larvae within a few weeks. Yet if these eggs or larvae dry out, then many fewer adult fireflies will be around to brighten our nights during the next few summers.

Update: The 2016 drought, as predicted, was associated with a noticeable drop in  firefly populations the next summer in the southeastern U.S., including the Smokies synchronous fireflies (fortunately, they then recovered!). You can read more about it here.