Ever wish you could understand what the fireflies are saying? Well, you now can!

The fireflies you’ll see most often in the eastern United States belong to one of the 34+ species of Photinus lightningbugs. These familiar fireflies fill our summer evenings with delight – they’re easy to catch because they fly at a leisurely pace, low above the ground. During summer months, different species make brief appearances, each with a mating season that lasts only a few weeks. Different Photinus species also start their courtship flashing at different times of night: certain species court just at dusk, while others wait until full darkness.

Taxonomically speaking, you need to inspect the male genitalia to really pin down Photinus species identifications. But many species also differ in the pattern and timing of their courtship flashes. So you can learn to distinguish species by paying close attention to the exchange of flash signals between males and females (using a stopwatch will help).

Photinus courtship goes like this: each evening, flying males advertise their availability by broadcasting a species-specific flash pattern. Females, who can fly but generally don’t, sit perched in vegetation and watch for males as they pass by. A females may respond to attractive male by curling her abdomen in his direction and giving him a flash back – it’s her “come hither” sign! When he flies closer and flashes again, they might strike up a conversation. This back-and-forth flash dialog will continue – often attracting other amorous males – until the pair finally meets and mates.

The chart below will help you decipher the distinctive courtship flash patterns given by 11 of our common Photinus species: 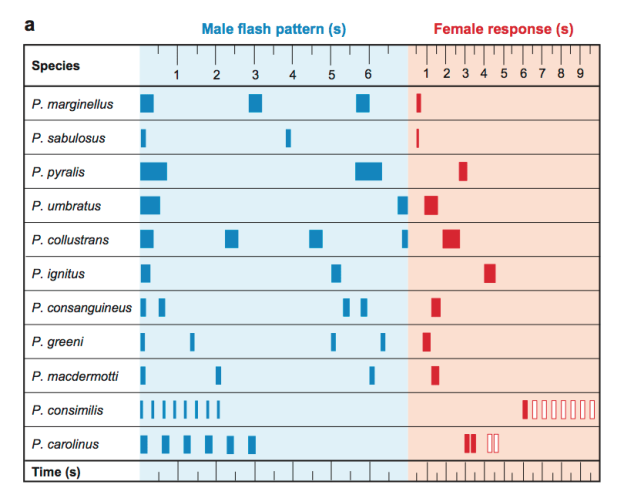 The top six rows show species where the male flash pattern consists of a single pulse of light that’s repeated at fixed time intervals. You can recognize what Photinus species these males belong to by paying close attention to their flash timing. For instance, Photinus pyralis males give a leisurely flash (about ¾ of a second in duration), which they repeat every 5-6 seconds. In contrast, Photinus marginellus males emit a quick flash (less than ½  a second), and repeat this every 3 seconds.

The next three rows show Photinus species where males emit a double-pulsed flash pattern. Here it’s the time interval between the two pulses that differs among species; this interval ranges from about ½ second in Photinus consanguineus to 2 seconds in Photinus macdermotti. In the last two species males give multiple pulses that vary in the number and interval between pulses.

Female responses are illustrated on the right-hand side of the chart. Look down in the grass for females, and measure how long it takes them to answer a male’s flash. In Photinus marginellus, females will respond almost immediately (within less than a second), while Photinus ignitus females have a response delay of about 4 seconds.

Once you know their language, you can use a penlight to join in the conversation! So step out into the night and enjoy the sho !

You can learn more about talking to fireflies in Silent Sparks: The Wondrous World of Fireflies.