On March 23rd Indiana became the fourth U.S. state to name a firefly species as their official state insect: Pyractomena angulata. Also called Say’s firefly, this species has a special connection to the state because it was first described by Indiana entomologist Thomas Say. 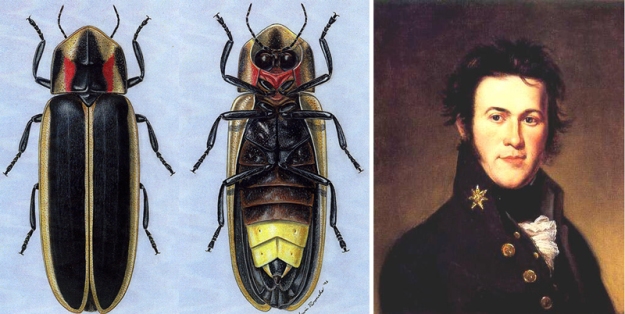 The official designation of Say’s firefly as Indiana’s first-ever state insect represents a heart-warming win, not just for fireflies, but also for the former 2nd-grade students at Cumberland Elementary School in West Lafayette. Beginning in 2014, they started  lobbying for this action, mounting a letter-writing campaign and even a Facebook page. Working together with teachers, scientists, and legislators, the students managed to gain bipartisan support and earlier this month watched as the bill was signed by Governor Eric Holcomb.

The Firefly Flag (left), poem, and drawing by  students from the Cumberland Elementary School (image from Xerces Society blog).

With its glittering presence, Pyractomena angulata just might be my favorite firefly – always gives me a thrill to watch these high-flying males rise and fall as they emit their distinctive long-lasting (~ 1 second) orange flicker. It’s also one of North America’s most widespread fireflies, occurring east of the Mississippi from Florida all the way north into Canada.

This species becomes active after dark beginning sometime in May in the southern U.S.,  June and July in northern regions. So even if you don’t live in Indiana, keep your eyes peeled for them this summer!